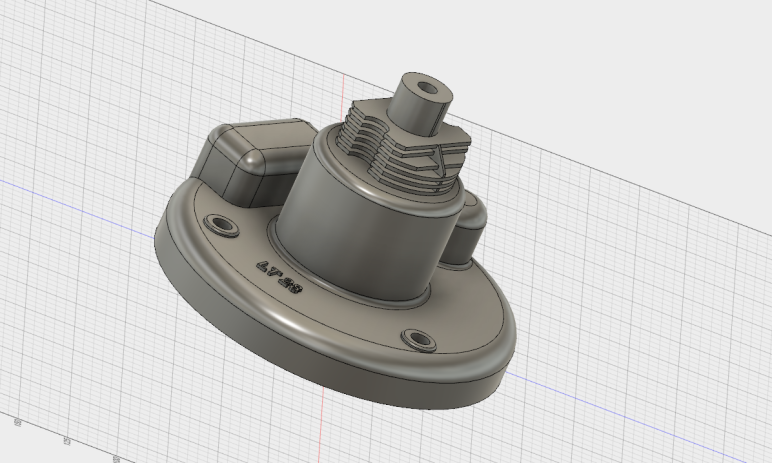 Now that we have a 3D printer at Workshop 12 I decided to teach myself how to do some 3D modeling.  Typically I’ve left this work to others in the past but it has always intrigued me and wanted to learn.  So late Friday night Rob suggested using Fusion 360, so I downloaded it and got to work.

I figured I would start off with a fairly small project to try and learn the software and general capabilities of 3D modeling tools.  So I decided to try my hand at creating the “Donut” which is a circular disk down on the side of the car near the side mechanics.  In the first Batman movie this was used as an area for a grappling hook which shot out the side of the car to help make a sharp turn.  In Batman Returns it was just a decorative piece on the car, and the decorative piece is the current one used for the car on display at Warner Brothers Studios.

I had the original donut that came with the fiberglass body parts for the BatBerry which gave me the approximate measurement of the diameter of the disk.  As you can see, the included fiberglass piece just wasn’t going to cut it for the BatBerry.  I figured I could do better 🙂

After a couple of hours on Friday night, with lots of help from Rob, I was able to model the base of the donut and was quite pleased with my work.  Rob gave me a tutorial on how to create the fin “thingy” that goes on the top which I finished up early Saturday morning.  The fins are a separate piece that are bolted to the bottom donut with a 3/8″ bolt.

Once I had everything the way I liked it was time to pop the two models into the 3D printer and let whirl away!  After about 26 hours of printing it produced the following results:

The printer did lift in a couple of places creating a few hairline gaps, but it’s nothing that a little bit of filler and wet sanding won’t fix.  I re-leveled the printer bed again before printing the second set for the opposite side of the car.  Overall a pretty good result for my first 3D model and a couple hours of work.  That couple of hours likely saved me over 2 days of fiddling in the garage.

As always I love sharing with the car community, and just like I shared my vector art for the Dash Panels, I’ll be uploading all of the STL print files for any of the side mechanics work that I’m doing.  To start things off you can grab the donut files here 🙂

One thought on “The Infamous Donut”