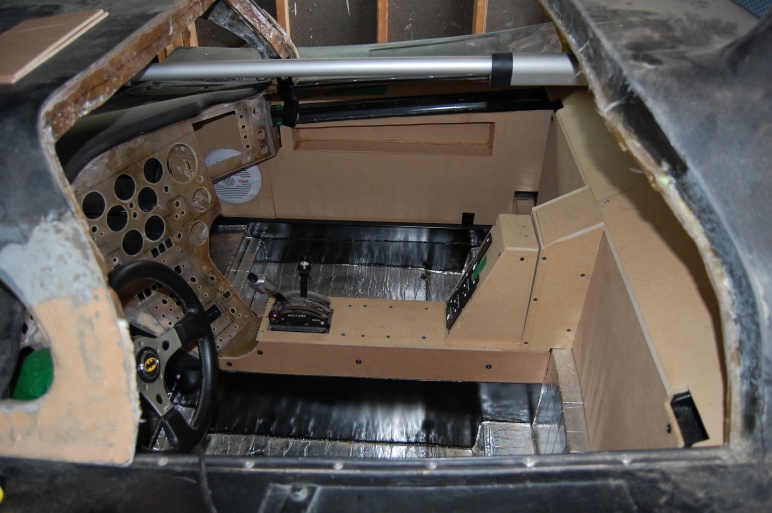 The goal this weekend was to finish the cabin interior panel fabrication.  I came close but there’s still about a day’s worth of work left to finish up the panels in preparation for them to be covered in vinyl and carpeting. There will also be a little bit of fiberglass work to create the shape needed around the top of the canopy opening.  The fiberglass pieces will likely be some of the last few pieces to finish off the cabin.

My goal is to finish the fabrication and then totally finish the interior work to make sure everything fits the way I want.  Then I’ll pull everything back out again so that it doesn’t get all messed up with the final body work. The inner armrest boxes turned out really well and are very solid now that the construction adhesive has cured.  Both fit well but will need some small adjustments to make sure they sit exactly as I like.

Next up were the panels that surround the front speakers on both the passenger and driver’s side.  I cut these panels with a little bit of extra space for the speaker and some notches so that it was easier to line the speaker up with the mounting points on the cabin wall. The screws holding the speaker to the outer wall will be used to secure the panel, and I might need one extra screw at the top just so that nothing rattles.

From there I moved on to cutting the notch out of the top rear wall so that the linear actuator can pass through.  To make sure everything fit properly I needed to re-install the actuator and power it up so that it was fully extended and connected to the canopy. I also created the rear center console extension that goes in-between the two seats.  This extension provides the spacing needed for the rear center switch panel.

I spent a lot of time just staring at the pieces trying to figure out exactly how I would secure everything and also be able to pull it all apart again.  There are a series of hidden tabs and covers that will ensure that everything looks clean with the least amount of visible trim screws.

The center switch panel is a bit of a tricky one.  I wanted it to be pushed forward as much as possible, but at the same time I wanted to make sure that I won’t be continually bumping my arm on it while driving.  So I re-installed the seat and reclined it to its desired position.  This gave me a frame of reference for how far forward I could push the switch panel as well as a tilt that would look good.

I’ll end up cutting out the section behind the switch panel and glueing on a 1/8″ piece of hardboard so that it will be easier to push through the switches and LEDs.  Once this piece was figured out I finished the final gluing of the main center console/armrest and cut its cover trim pieces which attach to the sides of the armrest.

The entire center console will be covered in black vinyl except for the rear console extension.  It will be covered in a carpet material to match the rear wall and top angle piece.  Since everything worked out the way I liked, all the pieces that were temporarily screwed together were then pulled apart and glued with construction adhesive so that they have some time to cure.

I only have a few pieces left to finish up to consider the interior complete. Most are covers and shouldn’t take too long with exception of the fiberglass pieces.  I know… famous last words 🙂