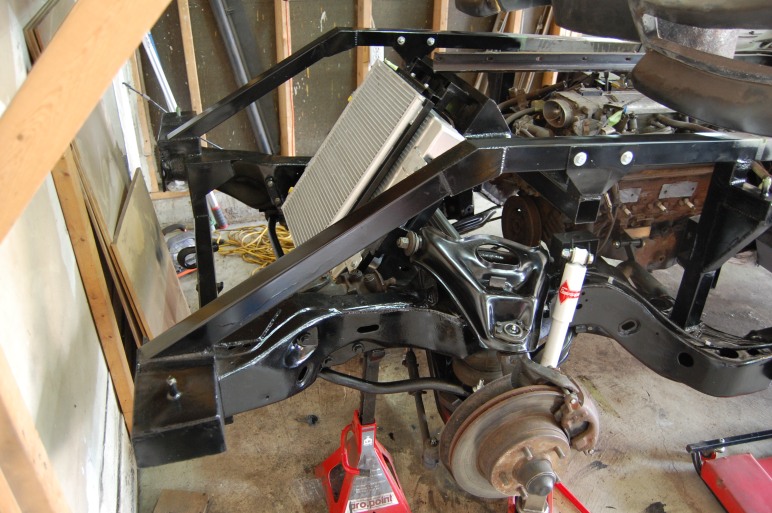 Another beautiful day for working in the garage!  Looking at the thermometer on the workbench it reached 25 degrees today.  I’m loving every minute of the heat!  All you could hear was me singing and whistling away to the music 🙂

After sorting out yesterdays issues, this afternoon was mainly a day of assembly work which started with getting the sway bars re-installed.  I ended up having to replace the bolts which connect the sway bar brackets to the chassis because the original ones were really corroded.  However, the heads on the new bolts were quite a bit larger than the originals which meant I couldn’t get a socket on them. So it was a lot of quarter turns with a wrench to get everything snugged up.

I also had to use a tap to clean out the threads of the holes on the chassis which were both corroded and also had some of the POR-15 in them.  After they were cleaned out it was just a balancing act trying to hold the sway bar up and get the bolts started without the bar falling on my head 🙂

The sway bar end link install went a lot faster since I could get a wrench and socket on both ends of the bolt.  It’s always hard to know when the end links are tight enough since you are squishing the bushings as you tighten.  So I just measured the amount of threads that were left on the drivers side and tightened the passenger side to expose the same amount of threads.

I was happy to find out that the brake line brackets worked really well.  It was pretty simple to push the end of the flex line through the notched hole and slide on the clip to hold them in-place.  You can also see in the picture below where I wrapped the plastic air line with some silicone hose (held on with some zip ties) to provide some extra protection for rubbing of the line against the chassis.

The air lines were then held down with some plastic P-clips so that I could direct them along the top of the chassis and out of the way of snags or areas where they could come in contact with other parts of the car.  I only have the front of the lines secured for now and will have to follow the same process back along the car to reach the rear hatch area where the Ride Tech valves are located.

The last task for the day was to get the radiator/condenser/fans re-installed at the front of the car.  Since everything was already bolted together it just needed to be secured.  The trickiest part was carrying it over the chassis while trying to step down in-between the sway bar and the front chassis brace.  It was nice while the sway bar wasn’t there which made it a lot easier to manoeuvre at the front of the car than it was today.

I’m really happy with where I am on the build now.  All of the mechanical bits of the car are completed which allows me to start running fuel lines, brake lines and wiring.  I should soon be able to place the car back down on its tires and pull the engine/transmission so that I can finish up the final painting of the engine bay and beef up the motor mounts on the engine cradle.

Finishing that work will then allow for the re-installation of the brake booster which leads to running the brake lines.  Giddy-up 🙂