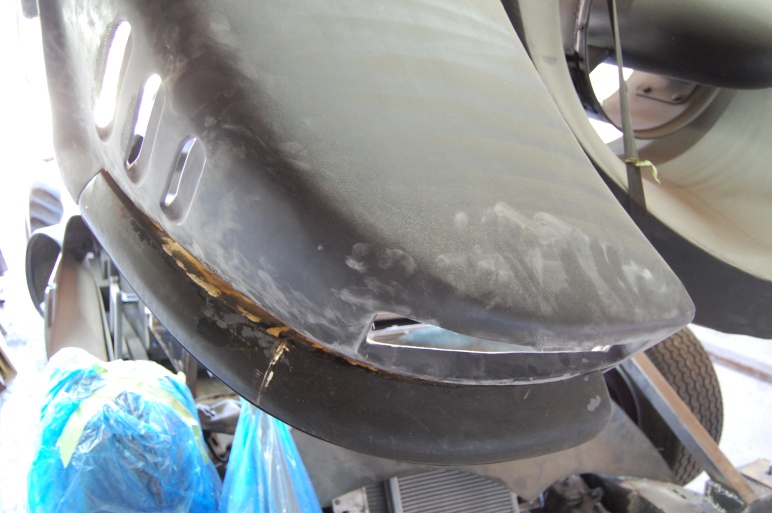 Today I finished up a couple more tasks from the TODO List that I’ve been meaning to get around to.  Namely, finishing off the “bumperettes/winglets” and also building skidplates for the bottom of the winglets.

There’s a TON of front bumper on this car sticking out in front of the two front wheels which makes getting into places with steep slopes a nasty challenge.  Fortunately I have lots of experience driving lowered cars, but the distance in front of these tires is a bit extreme.

What that means is that they will be the first point of contact for the car when it hits a slope of a driveway even when taking the entrance at an extreme angle and the suspension at full height.  So I wanted to add some steel armor to the bottom of these points to limit the damage to the fiberglass.

The start of this project was to trace the bottom of the passenger and driver’s side winglets.  Then mark some points that would be good areas to connect with bolts.

I then cut out these shapes and drilled the mounting points and traced them onto the bottom of the fiberglass winglets.  I also drilled the holes on the winglets.

Instead of having bolt heads sticking down below the surface of the skidplate I chopped the heads off of the bolts to create studs.  Then I recessed the stud into the opening of the skidplate and tack weld it in-place.  Once tacked into place it was simple to flip it over and complete the finish welding from the bottom.

After they cooled I test fit them in the winglets and then set them outside and sprayed them with a few coats of primer.  I did my primer spraying when I had some time waiting for fiberglass resin to cure on the passenger side winglet flange.

While the primer on the skidplates was drying I tackled the mounting points for the passenger winglet.  These were the same steps as on the drivers side.

First was covering the winglet with aluminium foil so that the resin wouldn’t stick and then building up a lip around the bottom of the body shell.

Then it was just a matter of drilling some holes for the mounting bolts and trimming off the excess and peeling away the foil.  Once everything was mounted to the body I also bolted on the new skidplates to both of the winglets.