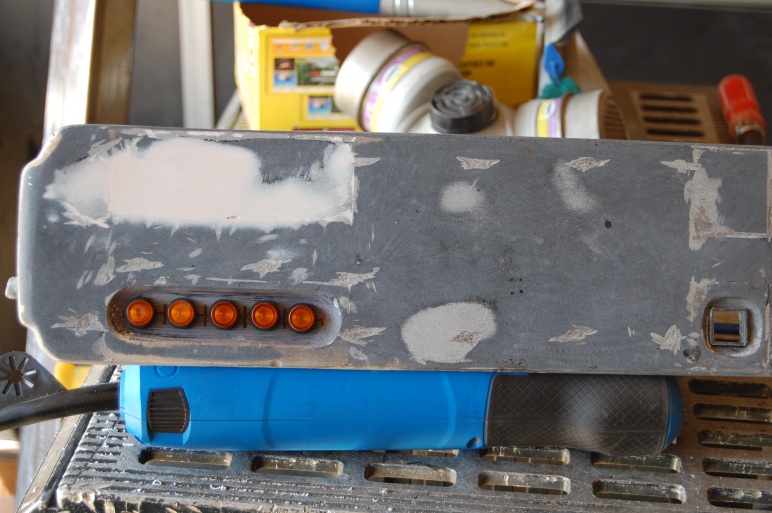 The other day I posted a teaser picture of some orange LEDs on my BBM Channel (C00121FC2) wondering what I might do with them.

I actually had the suggestion from a fellow Batmobile builder on what to do with the little small circles that were part of the recessed area of the bat-disc door.  I was thinking about what material I would use to get the look of those circular accents when he suggested making them into side turn signals for the car.

This was a great idea because the front headlights aren’t really that visible from the side, so the front turn signals will be hard to see from an angle.  Having some extra side signals will be great for extra visibility on my intent to turn.

Here’s what the little circle “thingys” look like on the actual Batmobile.  As you can see there’s a bit of a problem…. They’re not orange 🙂

But, this can easily be corrected.  There’s  a product that car guys have used for ages to tint their rear tail lights before the tinted vinyl overlays were available.  It’s a spray on product called Nite-Shades by VHT.

Simply spray it on to your desired tint level and when the lamp is lit it will still shine through with the original color (tinted of course).  So I created a little holder for the LEDs to make them easier to spray and got to work.

Here you can see the before and after comparison along with what they look like once they are lit when the tint has dried.

I then divided up the recess into equal parts and marked/drilled the holes for the LEDs trying to get them as straight and even as possible.  The end result can be seen in the picture at the top of this post before the LEDs were tinted.

Once both doors were marked and drilled I tinted the other five LEDs and left them out in the sun to dry.  Then it was time to start the passenger side door fabrication.  This was essentially the same process as the drivers side.

I was hoping to finish the passenger side metal fabrication yesterday but got delayed a bit when I was cutting out the square hole for the little poke through detail.  I cut the hole a bit too big so I had to use some short strand fiberglass to fill in the gaps and had to wait for it to cure.