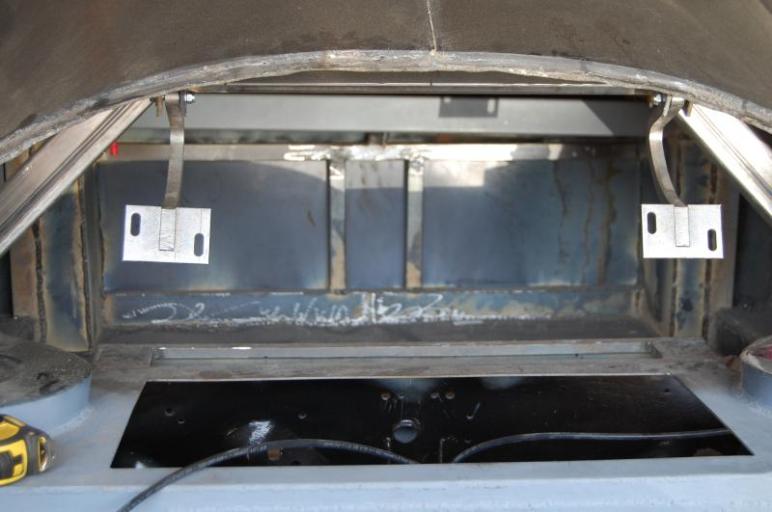 What started off as something that I thought would be pretty simple ended up turning into a day and a half worth of effort.  Lovely 😦

After spending last week at BlackBerry Live, I took this week off to relax and work on the BatBerry.  That is until this damn summer cold put me out of commission today.  So I figured I would blog some of our progress from the 2.5 days we spent working on the car.

The picture above shows the trunk hinges as they were first installed.  We then created a wooden template where we could counter sink the metal plates that would be part of the trunk.

I also welded a stud to the back of the steel plate so that the plate could be bolted to the trunk lid. We then attached the plywood to the trunk hinges and pressed it up against the trunk lid and used some wood screws to temporarily hold it into place.

Now this is where things got dumb.  After connecting the lid to the hinges we found that the  lid wouldn’t actually open.  As soon as it started to swing, the top of the lid would run into the back of the car.  Our thoughts on this was that the pivot point of the hinges were too far  up inside of the car, thus causing the collision.  So our idea was to move them further out past the lip of the trunk opening.

We cut the old supports out and tack welded some new ones into place.  We then performed the same process of temporarily screwing the wood to the lid in an attempt to swing it open again. Of course…. we ran into the same problem.  Frustrating!!

So we had the bright idea of looking at the trunk hinges of my Civic to see what was going on there.  What we found was that the hinge pivot points were tucked back further into the trunk opening.  But also the rear of the Civic’s trunk lid was curved to help clear the rear windshield. This had me worried that we would have to do the same on the BatBerry trunk lid. But I had seen lots of other builds where this didn’t have to happen.

I figured, let’s move the hinges back in as far as we could to see if that would help.  This time I just drilled and bolted them in place instead of trying to get in there and weld in supports.  This way it would be easier to remove if we were wrong… AGAIN.

BINGO! This move allowed the lid to swing freely.  Of course if you swing it up too far it will collide with the body, but for my purposes it worked out great.  Like all fiberglass parts, things don’t always fit the way that you would like.  They need to be persuaded into shape. This was also true of the trunk lid, so we needed to create a brace to try and pull in the outer edges/corners of the trunk to come back into the body at a better angle.

To make things all solid and create the full trunk lid as a solid piece, I needed to reinforce the plywood so that the temporary screws could be removed.  I had some carbon fiber cloth laying around so I decided to use it with some polyester resin.  This would create a very strong lightweight structure to hold everything together.

When we were all finished, we bolted the lid back onto the car to see how everything turned out.  I’ll still have a bit of re-shaping to do on the top corners to make it all match and flow into the body, but it’s a great start.