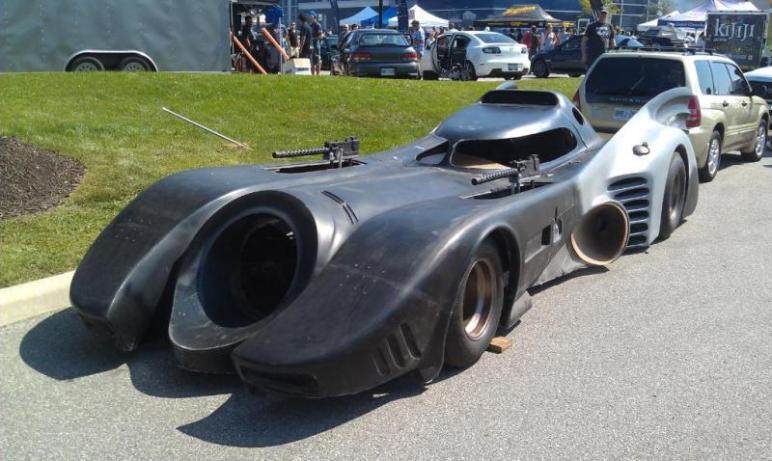 On August 26th the BatBerry made its first appearance at the Toronto Subaru Club’s Hypermeet.  Since my Subaru was in pieces after thieves had their way with my engine bay (Grrrrrr), I figured the Batmobile would be the next best thing to have at the show.  No body knew it was coming except for me, the event organizer and Budd’s Subaru who covered the cost of the flat bed service.  A big thank-you for all who helped make the first appearance happen.

I’ve been a member of the TSC for years and years.  It’s great to still see a lot of the old guard around, along with tons of new members.  I would have to say that this year’s event was the biggest that I’ve seen yet.

The BatBerry even won it’s first award at the show… wait for it…. Best Do It Yourself 🙂

I managed to get most of the interior re-installed for the event, exceptI didn’t get all the switches installed in time.  But all the gauges and LEDs were installed and on display.  We even popped up the 30cals for dramatic effect 🙂

Search & Rescue towing service (416-910-3710) was absolutely AWESOME at their job.  They knew how to get lowered vehicles onto their rig with no problems whatsoever.  I would recommend them to anyone looking to move a lowered vehicle.  They do a lot of work for Fisker Automotive as well.  We made sure to jack the car up on the air suspension, but we raised it even higher on the way home which worked out even better.  Ended up only taking us 10 minutes to load the car for the trip home.

The event was a blast!  It’s always fun to watch people’s reaction to the car (even in its unfinished state) and watching them walk right past high-end Porsches like they weren’t even there so that they could come over and look at the BatBerry.

But the best was driving behind the flat bed truck hauling the BatBerry and watching people’s reactions.  Cars swerving, almost running lights, cameras out sunroofs and windows and watching pedestrians do double and triple takes and pointing.  It made lots of good dinner conversation for people who saw it on the road.

Overall a good first outing with the car.  Hopefully next year I’ll be driving it to the event along with my Subaru 🙂