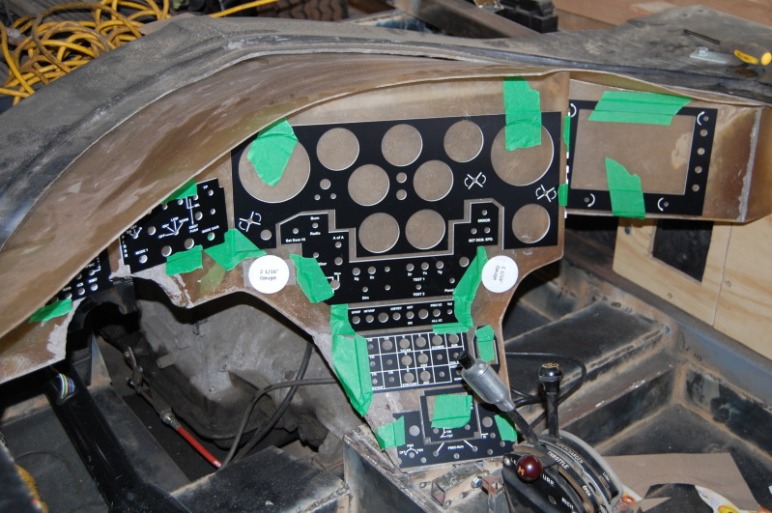 After getting the dash roughed in, I moved on to setting up the dash panels today.  The idea is to get everything in place including switches, LEDs, gauges etc so that I can slide the dash back into position and see if I have the proper clearances.

First step was busting out the dash panels and taping them into position.  Turns out I’ll have to widen the bottom of the dash even more to fit the bottom panels and also extend the area above the steering column down about 1″.  As usual, the second time around typically does the trick.

Once I had all the panels taped in place, I traced the inside of every opening with a Sharpie.

This led to a bunch of drilling, cutting and irritating fiberglass dust 🙂 By drilling out all the openings for the switches and LEDs it would allow me to see how everything is going to fit.  Some of the tests were to see if the shanks of the toggle switches were long enough to go through both the fiberglass and the panel.

Some were long enough and some weren’t.  Most can be fixed up with a little thinning of the back of the dash material.  The smaller toggle switches will likely need to be just attached to the dash panel and then the panel secured to the dash.  It’s better to do all the trimming now than having surprises when doing the finishing work.

It’ll be interesting to see how it all unfolds once I get a layer of black vinyl glued to the dash as well.  The cool part about the LEDs and switches that go through both the dash and the panel is that they also act as a fastener to hold the panel onto the dash.

This is what the dash looks like with “most” of the gauges, LEDs, and panels attached.

I was originally planning on running two gauges for the air suspension in the two center spots that are left open in the above picture.  However, after talking to Kevin at Air Assisted, I’m likely going to go with a computerized self leveling system with programmable preset heights.  So I’ll probably just add a couple more automotive gauges in these slots.

And of course, just like I mentioned in my previous post about things never working the first time and to count your blessings when they do… I’ll need to make some modifications to the dash bar and its supports 😦

I’ll need to create some clearance for the speedometer and other gauges.

I already know how I’m going to fix the needed spacing so it’s not a huge problem, but it just means more work.