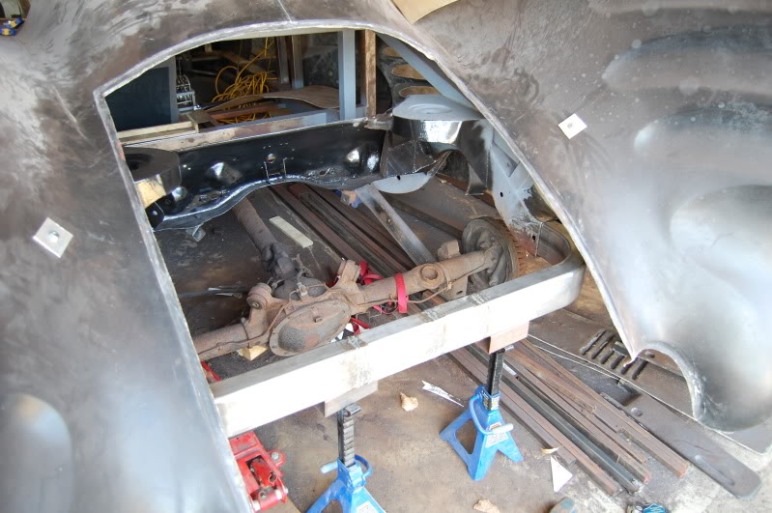 This afternoon I dug in and finally built my rear bumper beam.  I had been waiting until I had all the plating and rust repair done on the rear because I needed lots of room to get at things.

Now that the rust removal work is completed I’m able to tie the two sides of the rear frame together.  To start off with I placed the rear hatch and mocked up where the afterburner will go to give me an idea of how far back the bumper beam needed to be.

I made sure that the bumper beam was positioned so that I still had some play on how far back I may want to set the afterburner.  From there I removed the hatch and took my measurements.

I needed to cut even more off of the end of the rear of the frame and also grind of the last bits of rust on the rear so that I had clean metal to weld to.

I had shown before in a previous post that I had picked up some 2 x 4 ninety degree bends that I was going to use for tying the back of the frame together.

I marked and cut the ends of these so that they would fit.  There was still a gap of about 12″ between the bends when they were inserted into the rear of the frame.  Luckily there was enough material left over from cutting the ends to make a center section to fill this gap.

I created a simple clamp to ensure that all my pieces were all straight and true before I welded them together.

I also had to take some time to sit back and admire how much better my welds are looking.  Its amazing what a little practice and experimentation can do for the quality of your work 🙂

After I had the rear bumper beam set in place (as seen in the first picture in this post) I finalized my measurements and welded the beam.  I had to do a bit of boxing since the frame was a bit taller and wider than the 2 x 4 tube I used for the bumper beam.

I also welded in some plating on both sides of the beam where they connected to the frame for some added extra strength.  The final touch was to seal it all in with a coat of primer.

One thought on “Rear Bumper Beam Ready To Go”