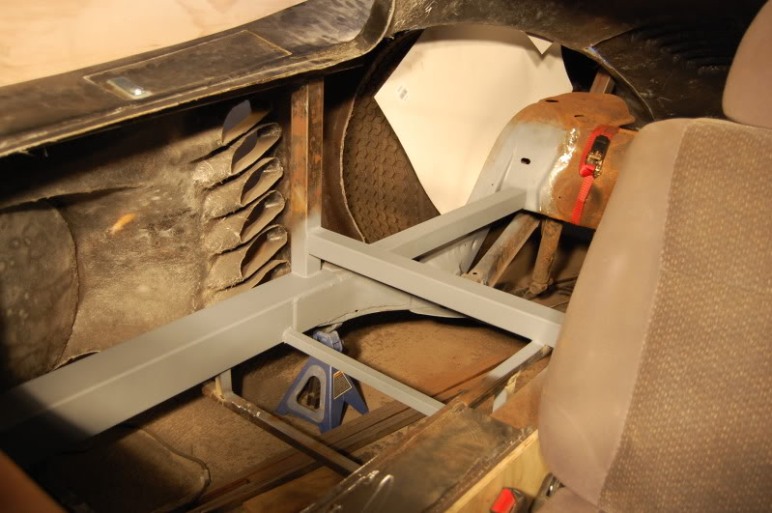 I decided to take this afternoon off, but I did manage to get a little bit of work done this morning.  I wanted to weld in a brace from the rear to the new cross piece that ties my two side ladder bars together.  (This can be seen in the top right of the picture)

The idea of this piece, and the duplicate one eventually going in on the driver’s side, is for the following purposes:

Before welding this piece in place I had to clean off all the rust from the frame.  I also had to drop the bottom trailing arm to be able to get the grinder up onto the frame.

Then I had a bit of epiphany, by the time I’ve finished cleaning up all the rust on the rear of the frame to do all my planned welding, I’m not going to have to get it sandblasted.  I’ll probably only need to remove the tires and pull out the rear end and take it to be blasted. 🙂

So I figured I would also start to do a little bit of cleanup on the rest of the frame that was considered “new steel” back in that area and give it a nice coating of primer to seal it all and keep that nasty rust away.

I’ve decided that as I finish up different areas of the frame, I’ll give it this same rust removal and primer treatment.  That way I don’t have to send it out for blasting.

One thought on “Some more rust removal”