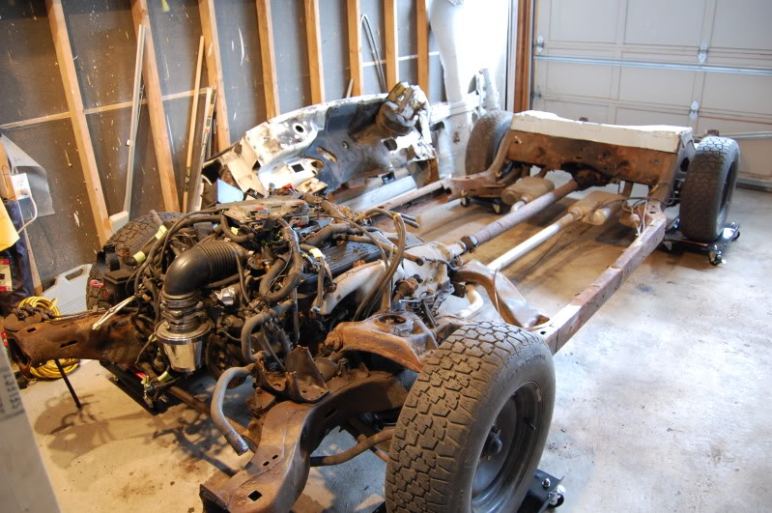 After two and a half days of work, the BatBerry donor car is stripped down and almost ready to go.  A BIG thank-you goes out to Christian and Greg from my local car club who came by on Saturday to lend a hand turning wrenches.

A HUGE thank-you goes out to my Dad who came down for the weekend and stuck it out for the full two and a half days wrenching on the car!

Day 1 – Saturday:
Things started early with the garbage bin being dropped off in the morning and getting the garage prepped/cleaned so that we could get working without tripping on a bicycle.

Soon after the garbage bin was dropped off, the boys arrived and the Discovery Channel camera man pulled up and unpacked his gear.  The camera man set up the garage with a time-lapse camera, another little camera that could get into tight spaces, a shoulder camera and wired me up on a mic for the day.

Filming was fun!  There were small interviews asking questions about the project, and the little camera was set up in fun places where we were asked to throw stuff at it!!  We had a great time and I can’t wait to see how it will all look when it’s edited for the Daily Planet 🙂

At the end of the day we had the interior removed, front/rear bumpers off, front fenders off, doors removed, windows smashed and the roof cut off.

Day 2 – Sunday:
Starting again bright and early in the morning we really cut into the car.  This is where the car saw most of its major transformation.  There’s not a whole lot to say about “Day 2” other than it took lots of hard work and the pictures speak for themselves

Day 3 – Monday:
This was mostly final trimming work and clean-up.  After we had the garage all cleaned, we set the car back down on some wheel dollies so that I can easily move the car around the garage by myself to work on it.

We saved a couple of things from the body that we though I could possibly re-use.  One was the firewall.  We may be able to use pieces of the firewall to save me some time fiddling around.  It already has the brake booster and brake and gas pedal assembly that may also save me a few bucks.

The transmission tunnel was another piece we saved.  Again, I don’t know if I’ll be able to re-use it either, but it’s worth a shot.  Finally, we saved the sheet metal for the floor that loops over the rear end and into the trunk pan.  This will save me time fabricating this area.

One big relief was to see the shiny metal sitting under the surface rust!! I think we have a winner 🙂

Now I’ll have to get it prepped for the chassis stretch.  This will mean cleaning up the areas that will be spliced and welded and stripping all the little things like brake lines and fuel lines off of the frame.

3 thoughts on “A Weekend Of Progress”